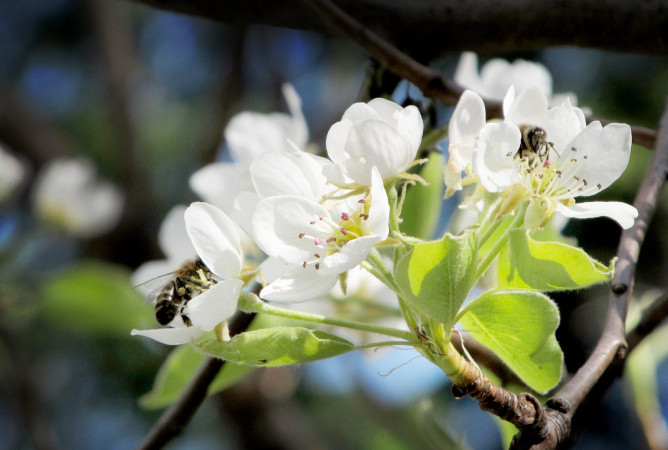 It is estimated that around 20,000 species of bees exist in the world, while 1,965 species are listed in Europe. 400 species of bees living in Europe are endemic species, meaning they are not present anywhere else in the world.
Bee can be divided into lifestyle, social, solitary, and kleptoparazite. Although most commonly known, social bees, including honeysuckle and bumblebees, account for only 6% of the total number of bees. More than 90% of species are considered solitary bees. Bee kleptoparaziti are characterized by the fact that their eggs go to food stores collected from another bee. So they got the name of a bee cow.
70% bees populate in the soil. They dig tunnels in the country where food stores are stored and eggs from which their offspring are developing.

The world’s smallest bees, Quasihesma clypearis, are only 1.8mm long. The largest bee, Megachile Cow, can reach a length of 39 mm with a 63 mm wingspan.
The oldest found fossil bee is about 100 million years old. It contains several features with the axes whose first fossil dates back 250 million years ago. This is proof that the first bees have developed from the part.
In North America honey bees are not an indigenous species. Only in 1622 they were brought from Europe by British colonists.
The medullary bee flies at an average speed of 24 km / h. Usually the distance is 1-6 km from the hive, and the distance is up to 20 km. Solitary bees fly up to 200 m from the dwelling, and if they have enough food near and smaller.
Bumblebees produce honey, but in much smaller quantities than honeysuckle bees, so they are not used for human consumption.
The bees of plants do not use only pollen and nectar. Some species for building nests from plants use leaves, resins, oils, petals …
bee cutters list

The bee tree in some areas is a serious problem because of its nest nesting in wooden buildings.

Birds beekeepers are the natural bee’s enemies. Bees and other flying insects love only in the flight, and before they are swallowed, the beak cancels the whip.
Picture of bird beekeeper

Solitary bees that cover their dwellings in damp earth are called bee masters.
Honeycomb bees, including Osmia cornuta and Osmia bicornis, are housed in cavities of 5-15 mm in diameter, with up to 15 eggs. Each of the eggs together with the prepared food (a mixture of pollen and nectar) separates from the adjoining partition of the ground.
To prepare food supplies for one egg, the female must work for several hours.
For security reasons, the last cell always remains empty, and the last partition is several times thicker than the others.
Picture of a bee Osmia bicornis in a basket

The female can decide for her whether she wants a female or male egg. Closer to the exit from the cavity, they always lay eggs from which males develop, since they are legged and out before the females.
Since she dies until the summer, and the offspring begins flying only the following spring, the bee’s parent never sees her children.
The mushroom bee can overflow over 2,500 flowers during one day.